When we talk about governance in Microsoft Teams, one of the most common and first requests we get is, “We want to apply naming conventions to organize our teams better” – this is the first logical approach that comes to your mind when you know the only available property you can manipulate is the team’s title. The good thing is that Microsoft understands the problem and provides solutions through the Microsoft Groups naming policy. A good start is if you have an Azure Active Directory Premium P1 license or an Azure AD Basic EDU license for each user (including guests) belonging to one or more Microsoft 365 groups.

With Powell Teams and its naming conventions feature, you can forget about these limitations:

But in the end, is it a good idea to apply a naming convention on a team?

It is evident that it will help IT find and organize teams more quickly, but will it help users?

Naming conventions have one major disadvantage for teams: the team’s name doesn’t reflect the goal of the team, it reflects the goal of the organization, and most of the time, it’s so long that you end up not knowing what is the difference between all these multiple Teams in Microsoft Teams interface. 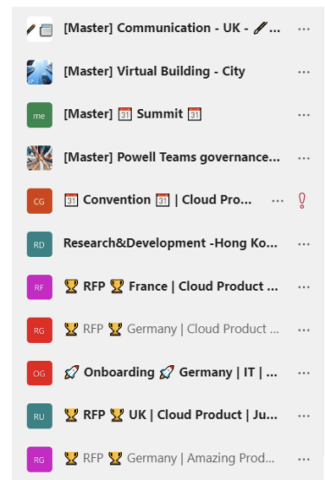 Several strategies exist to reduce these problems, such as:

Another topic many forget when implementing naming conventions based on dynamic values ​​such as departments or goals is the lifecycle of teams. The best sample can be an RFP with a client:

Over time It becomes a headache for everyone to retrieve the team when you constantly rename it.

Even if we came up with that feature, we could use Microsoft Teams with no naming convention for the benefit of everyone (IT and users), with two Powell Teams features: Team Templates and Tags.

In addition to providing a fully configured team with all channels, tabs, default content, default security, etc., the Powell Teams template can be viewed as a super tag that allows you to quickly identify your team’s goals, such as “Internal content or shared with guests.” ‘, ‘RPP,’ ‘Onboarding,’ ‘Department’… You can easily identify teams from the Powell Teams interface. 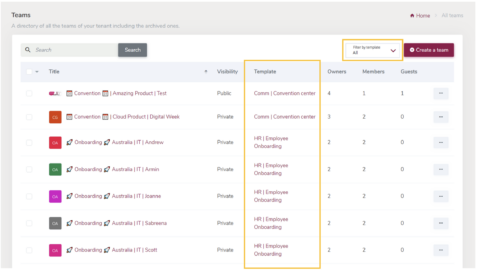 For complex organizations or when you need to qualify your content better, you can add tags to your templates to make it easier for refiners to target the teams you want.

With this type of functionality, there is no need to use naming conventions; your team name reflects the “real” goal, no technical acronyms, and no need to change over time; you can still find it easily, no matter What is the current goal of the team: You can change the tags by changing the team name without breaking the access rights of existing users. The cherry on the cake, instead of using your naming convention as a classification tool, you can use it as an additional visual aid for your employees by simply adding a visual symbol (windows + 😉 to the team name. This does not affect the visibility of team names and allows your users to understand and scan team lists faster.

For example, we’ve added an icon below to identify internal teams and teams shared with guests, so users can instantly know what type of content they can share in a team and reduce the risk of unnecessary sharing. 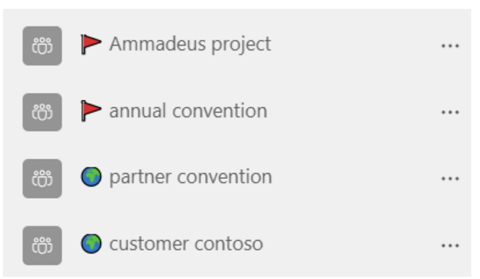 In this article, we want to emphasize that naming conventions are one solution for organizing teams, but more efficient solutions exist, such as using Powell Teams templates and tags.