What is Microsoft Teams and how is it organized?

Microsoft Teams is a chat-based workplace collaboration tool that allows you to communicate and work cohesively with team members. It was introduced by Microsoft in 2017 as part of the Office 365 suite and integrates many different collaborative functions into one seamless interface.

The primary level of Microsoft Teams organization occurs within teams, or groups of employees with a shared goal or purpose. For example, each department within a company typically gets its own team. Within each team are multiple channels, or message threads in which team members can communicate. You might create a channel for a specific project or to discuss a particular topic.

In each channel you’ll find a conversation where messaging occurs. However, there are also multiple tabs available, including tabs for files, notes, and even third-party apps. Tabs can be added to each channel as needed.

Employees can also message each other one-to-one and in groups through chats. Chats aren’t assigned to a specific team, but like channels, they support the creation of tabs for different apps. Chats are generally used for more urgent communications that need immediate attention. 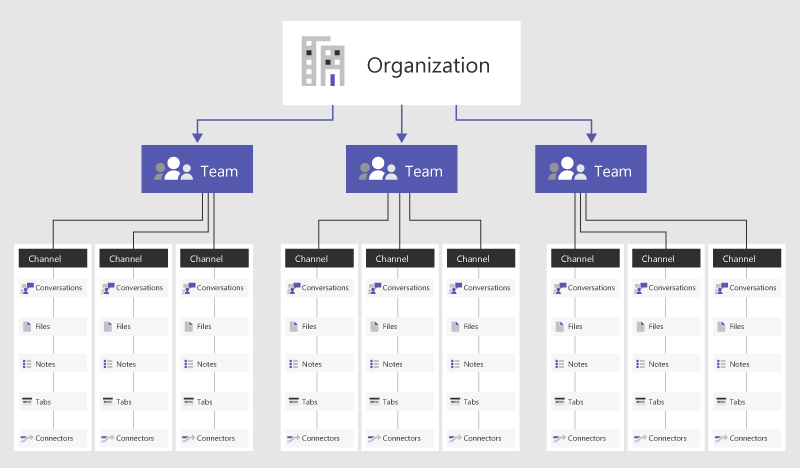 How does Microsoft Teams integrate with Office 365?

Microsoft Teams is an integral part of Office 365 and allows you to access many cross-platform functions from within the app. Here are a few ways that Office 365 apps integrate with the MS Teams structure:

Part of the draw of Microsoft Teams is that most of this integration happens automatically, without you needing to perform additional setup tasks. When you create a new team in MS Teams, the following actions are triggered:

Worth mentioning is the growing number of third-party apps that support Microsoft Teams integration. Here are a few examples:

One common issue that companies run into is the difficulty maintaining Microsoft Teams organization. This is especially true among larger companies with multiple offices, departments, and cross-functional teams.

In our experience, there are three main ways that your company’s Microsoft Teams administration can set employees up for organizational success. Keep these in mind when creating your MS Teams structure and you’ll be on your way to a better-organized system. 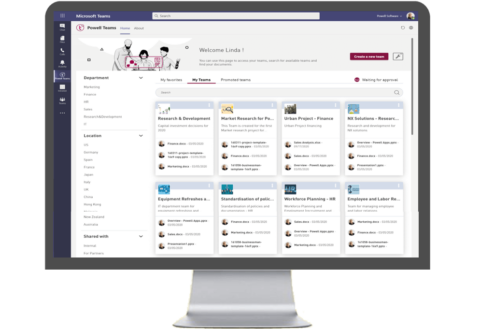 1. Decide who will have Microsoft Teams administration privileges

By default, all users in your Office 365 organization will have the ability to create and modify teams. Whether or not you want to modify Microsoft Teams administration privileges depends on the company. There are advantages and disadvantages to both approaches.

The more employees that are given administrative rights, the more challenging it can be to maintain the Microsoft Teams organization standards you put into place. On the other hand, if fewer employees have rights, it creates more work for the administrator(s) to handle requests to modify the MS Teams structure.

2. Use a standardized naming scheme

If different users each invent their own names when creating new teams, the result will be extremely messy. Some teams may include a location or department name, others simply a project title, and so on. You might even face duplicate teams being created by someone who couldn’t find the team they needed and didn’t know it already existed.

A standardized naming scheme is a system that defines how each team will be identified, often using key identifiers separated by dashes or underscores, and in which order. Some of the identifiers you might think about including are country or region, office location, and department name. Feel free to use standard abbreviations when possible to shorten team names.

By agreeing on a standardized naming scheme early on, each employee’s list of teams will appear much cleaner and easier to sort through. You’ll also avoid the accidental creation of duplicate teams.

The purpose of Microsoft Teams channels is to organize Team conversations by topic and make information more manageable. Encourage the use of channels within each team and decide when and how new channels should be added.

For example, a team may choose to create a different channel for each major project. This makes it easy to find conversations and documents by navigating to the corresponding project channel. Without enough channels, employees may spend ages searching for the information they need.

The tips we’ve provided will help you maintain Microsoft Teams organization, but there’s an even better way to set your workforce up with the tools they need to collaborate effectively. Powell Teams is a tool that transforms your Microsoft Teams app with tag-based classification, automated naming conventions, templates, and more. Curious? Find out more here.