What We Learned at the SharePoint North American Conference

One of my favorite movie trilogies of all time is the popular Universal Pictures Movie, “Back to the Future.” Last week, I attended the SharePoint North American Conference in sunny Las Vegas and I couldn’t help but think about how the Microsoft message is parallel to the trilogy story arc. I thought it would be fun to summarize the content and Microsoft’s message shared at the conference through the Back to The Future trilogy structure. 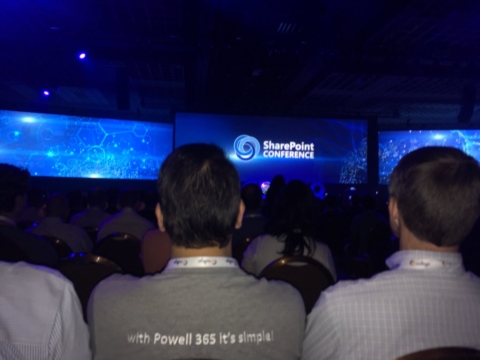 Back to The Future 1: Investment in the Past

Microsoft moved quite quickly into the hosted space and all the service offerings are available with Office 365. Want to use SharePoint? Use SharePoint Online. Do you want to save time and effort and use hosted servers? Use Azure Services and Storage. Not so long-ago, Microsoft only had USA based data centers and it was a difficult or impossible proposition for organizations to move to Office 365. While that barrier is no longer there, Microsoft recognized that organizations will continue to look to host their own content and services. SharePoint On-Premises lives on! SharePoint 2019 was announced as the next release of SharePoint On-Premises. This was great news for organizations, as it was made evident by the loud cheers at the SPNA keynote.

The second announcement that stands out is Microsoft’s investment in improving native SharePoint functionality. It was a bit surprising to hear the roaring cheers and the gasps of relief as Microsoft announced the list of improvements.  I was confused to hear that the copy and paste from XLS to SharePoint Lists has improved. I didn’t know it needed fixing or improving. Seemed simple enough, but it is big news to those who have longed for this feature.

The future looks bright for Microsoft. A lot of new features were announced for release. It was clear that Microsoft foresees drastic changes for the Information Worker space. One of the statistics shared was how by 2020, 70+% of the work force will be millennials. That’s a complete changing of the guard! I realized, “wait, I’m part of that 70%”. So, what does my future look like?

Collaboration has changed over the years and Microsoft is betting on Microsoft Teams. Like any other tech company, v1 is just an appetizer and a way to gauge market interest. It’s v2 that really hits it out of the park. Think of Microsoft Teams as v2 of Microsoft Groups. I think Microsoft Groups really failed to gain steam for several reasons, not so important to this post, but MS Teams is clearly the collaboration direction of the future. I see great potential in MS Teams as I have seen a trend in organizations where Teams often merge the concept of communication (intranet) and collaboration.

Social and analytics features are becoming the expectation of any information worker. Largely influenced by the social media explosion, organizations have struggled to realize the benefits of social and analytics in the collaboration space. Microsoft showed simple features enabled on libraries, lists, and Delve to infuse your collaboration with rich social connections and analytics (Power BI) almost as a side note. These features aim to help provide insight and discoverability that will change the way you collaborate, communicate and discover content.

Artificial Intelligence is the inevitable direction.

I would be disappointed if Microsoft was not investing in this space. There is so much application in the information worker space that the sky is the limit. The first hint of this was Delve, where users noticed the advantages of connections between content and users. Although quite basic functionality, the road was paved there. Expect API, recommendations, search and overall discoverability of information powered by AI.

Every organization has that pie in the sky idea. That long shot idea that could really take off, but the viability and adoption of such a product or idea is unclear. Introducing…SharePoint SPACES. Marketed as “Mixed Reality” it is the next big thing to build learning, product development and on-boarding solutions, among others. I’m not sure if the world is ready for information workers with VR Headsets just yet, but I see how this could be applicable for Retail solutions, product development and maybe remote conferencing.

In the third installment of the Back to the Future trilogy, one of the characters is confused about a piece of information she kept from the future. As the main characters travel back to their present timeline, the information from the future is erased. The explanation from Doc (one of the main characters) as to why the future is erased; “The future is whatever you make it, so make it a good one”. I have always remembered that quote, not just because it’s my favorite trilogy of all time but because I think it’s true.

So what kind of future are we making for our business; our information workers? From investments of Microsoft, it looks like enabling users to quickly create information, engage in collaboration and communicate content is more important than governance and process. Does this sound familiar? It should. It was the message when the early versions of SharePoint were released (2003, 2007). Many organizations looked to implement this great Site provisioning tool (SharePoint) that came free with Windows Server only to end up with a mess of information on their hands. Make sure you make the future a good one and learn from the past. So many good messages from this movie trilogy.

If you don’t have an app, you’re stuck in the past (I really wished that rhymed). The reality is, the new Information worker is on the go and on mobile devices. Microsoft is definitely aware and is continuing to invest in the Mobile App. Outside of AI being more of a focus in Mobile, nothing groundbreaking to announce here. Definitely look for future investments in the Mobile App.

From the development front, I can say that SPFX and Extensions are clearly the standard for SharePoint development moving forward. There were new features announced around consumer/provided SPFX framework. These features are not new to developers but, are new to the SPFX framework. There were some really great features around Socket.IO and event listeners, Dynamic Data extensions, pre-allocated page place holders, Site Design enhancements and much more.

It appears that Microsoft is clearly looking to the past and to the future to create a present ‘mixed reality’ that considers both. Being a former SharePoint MVP for 4 years, this was the first keynote I attended and it was interesting to feel the excitement around the room. By far, my most significant take away was the realization that Microsoft is investing a lot into APIs, Frameworks and Development hooks. They are trying to enable developers, partners, and customers to innovate and build for their own needs. I don’t know if this has been a gradual shift to deliver tools (APIs & Frameworks) instead of fully-built solutions, but I guess I had not realized this shift. This is really good news for partners that are building solutions that leverage Office 365/SharePoint, like Powell 365. The future is bright for all and the innovation challenge is on!