Microsoft has recently placed a focus on enriching the Teams platform with better functionality and integrations. This means workflows that once required multiple applications can now be completed right within a conversation. While this is improving day-to-day efficiency, it also means that companies are faced with a surge in the volume of information passing through Teams.

For those that aren’t prepared with a Microsoft Teams governance plan, this can quickly lead to uncontrolled sprawl and disorganization that hinders productivity. The best solution is to stay on top of governance before it becomes an issue – which requires defining the Teams lifecycle and putting management processes in place.

The typical lifecycle of a team

While every team has its own unique lifespan, most share a similar pattern of progression. Microsoft defines the Teams lifecycle in three stages that constitute a clear beginning, middle, and end. Each stage requires a different type of management from those in charge of overseeing governance.

Every team is created for a purpose with a specific goal in mind. When and how your company adds new teams will depend on your predefined organization plan, whether it’s a new project or business function. The team should be named according to a standardized naming scheme to keep things organized and avoid the creation of duplicate teams.

In addition to the General channel included with each Team by default, the Team administrator will also set up channels within the Team. Again, these channels should generally follow a company-wide structure that defines how channels are organized. You may decide to create a separate channel for each topic or project and to choose whether you need public or private channels.

Key points to consider when setting up channels:

Creating Teams templates and setting up channels in the Powell Teams admin center: 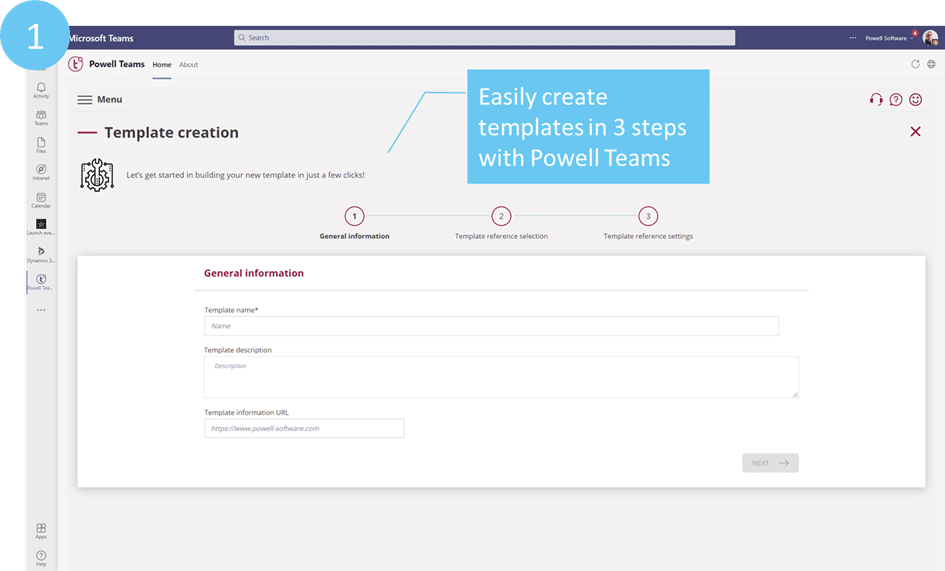 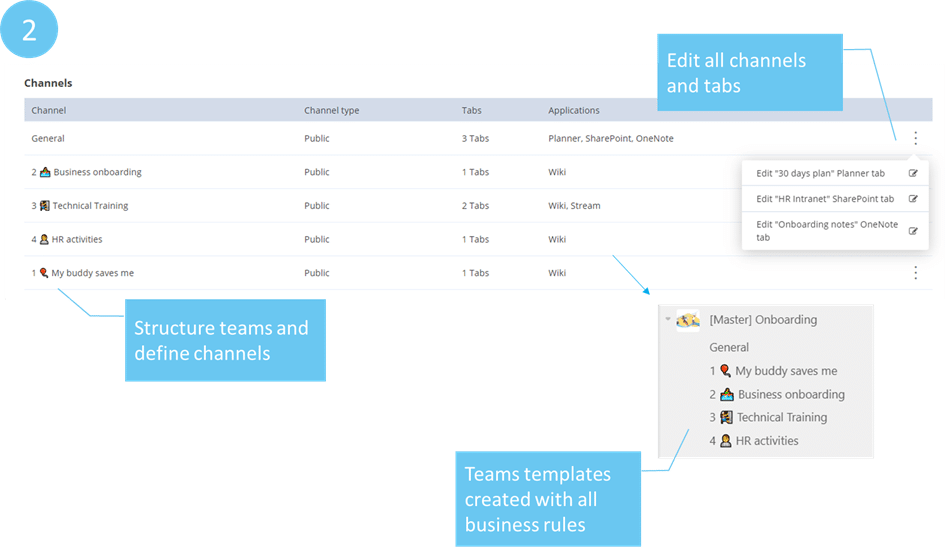 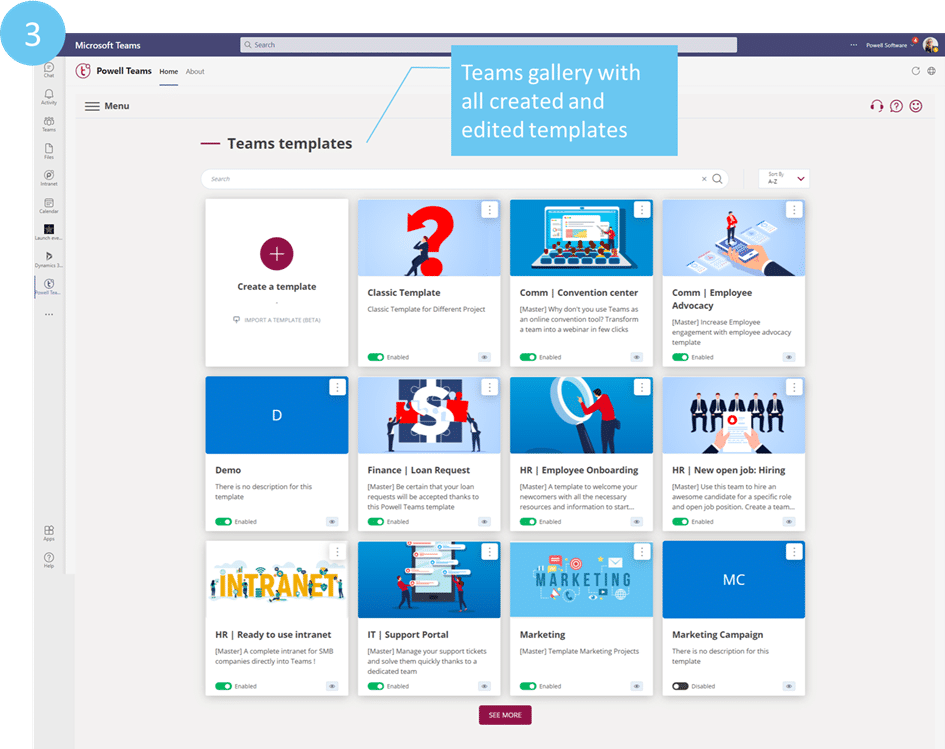 The second stage is the longest in the lifecycle of a team. This is the stage during which employees use the team for its intended purpose, members are added, and additional channels are created as needed as teamwork makes projects and topics evolve along with Teams structures and hierarchy.

But just because a team is in use doesn’t mean you can just let it run on autopilot. The lifecycle of a team is not linear, and your needs within the team may change as the project or function it serves progresses. Make sure to check in regularly to see whether activity is still taking place if any users should be added or removed, and if any channels have become defunct or any new ones need to be created and manage the ongoing use of all your created teams.

With the Powell Software Power BI report – categorize all Teams easily. Apply a template to the Teams you need to manage and tag it for a better follow-up process. 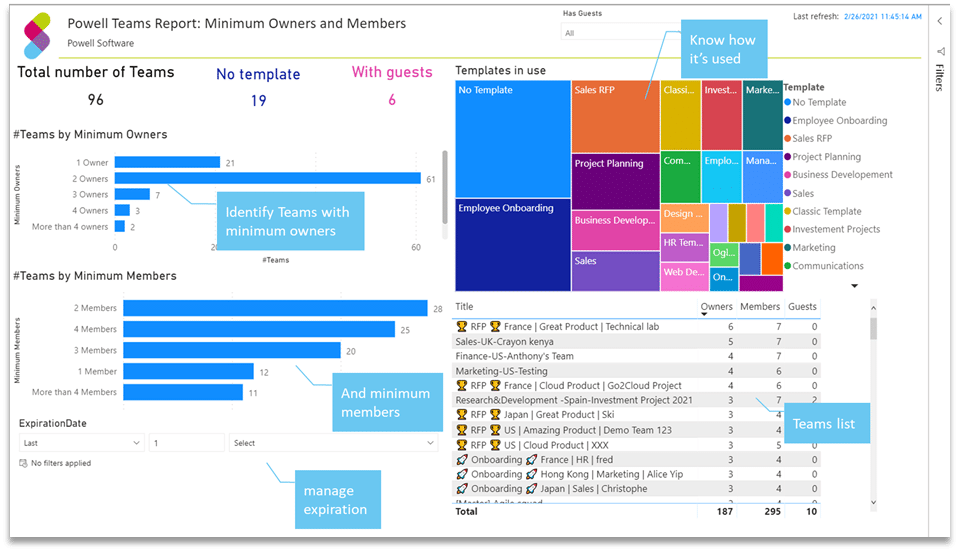 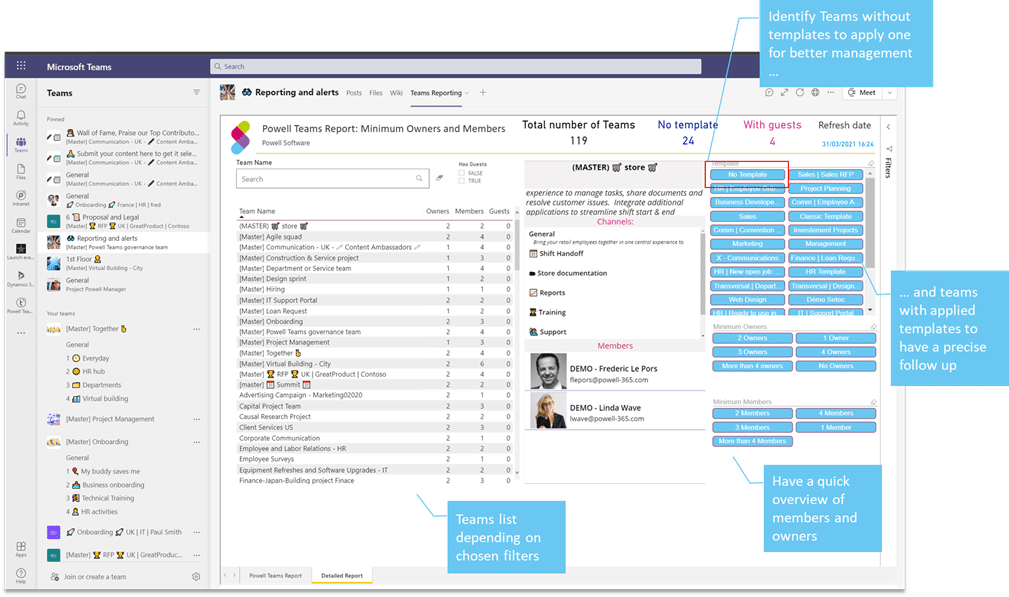 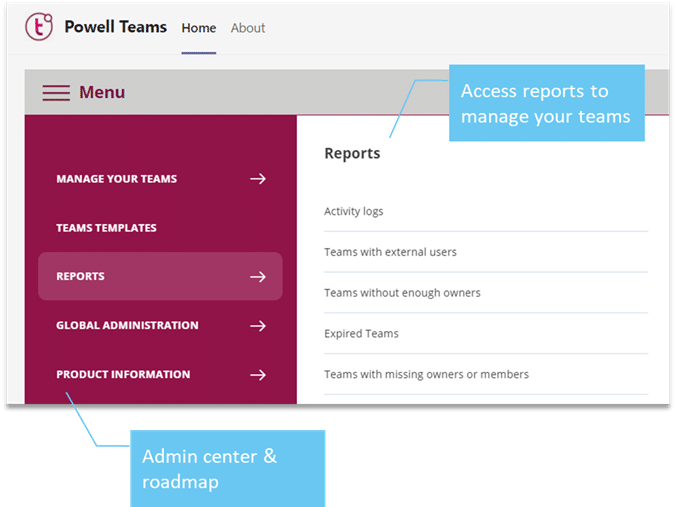 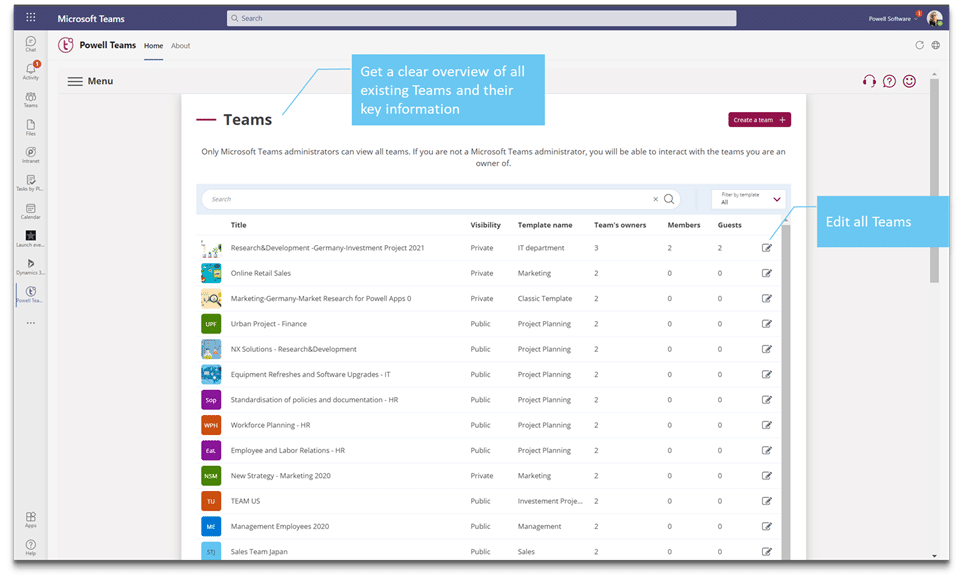 3. End of life  – Abandonment and deletion

Eventually, most teams fall out of use and are no longer needed. Sometimes there may be a clear end date; for example, if a project is completed, it’s easy to pinpoint when the team’s lifecycle will come to an end and schedule it for deletion.

Frequently, however, the team will enter a slow decline that may pick back up several times before activity dies completely. In these cases, how do you know that a team should be archived without closing it prematurely? This is one of many pain points that companies face in Teams lifecycle management. In a bit, we’ll get into how to define the lifecycle of a team internally and eliminate the uncertainty. 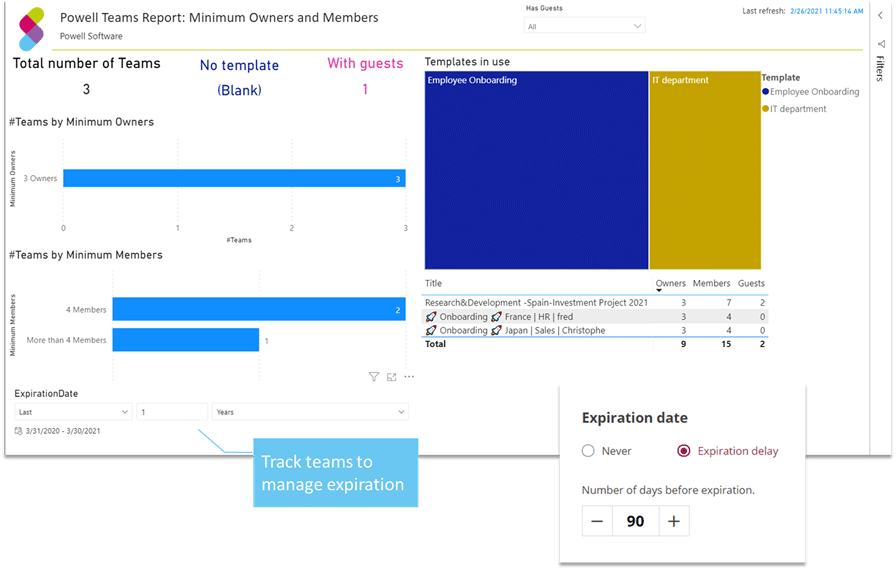 If you haven’t yet laid out a clear Microsoft Teams lifecycle management process, you may find that certain challenges arise related to the lifecycle of teams. These issues can put a damper on productivity as employees struggle to sift through antiquated information and turn to their own solutions to organize the mess.

One of the first steps to Microsoft Teams governance is creating a naming scheme that includes key identifying information such as location, department name, and function. By setting teams up with standardized names, it’s easier for employees to quickly locate the team they need. You’ll also eliminate the chance of someone accidentally creating a duplicate team because they can’t find the one that already exists.

Defining a naming convention to apply for all Team creation:

Inactive members remain in a team

Throughout the lifecycle of a team, new members are often added as they join the associated project or function. However, it’s also common for users to leave the group for which the team exists. Over time, the team may accumulate several members that simply don’t need access anymore. Businesses should remove these users regularly to prevent security issues and help employees keep their own list of teams free of impertinent information.

Removing users from the organization in Microsoft 365 deletes their presence in Teams: 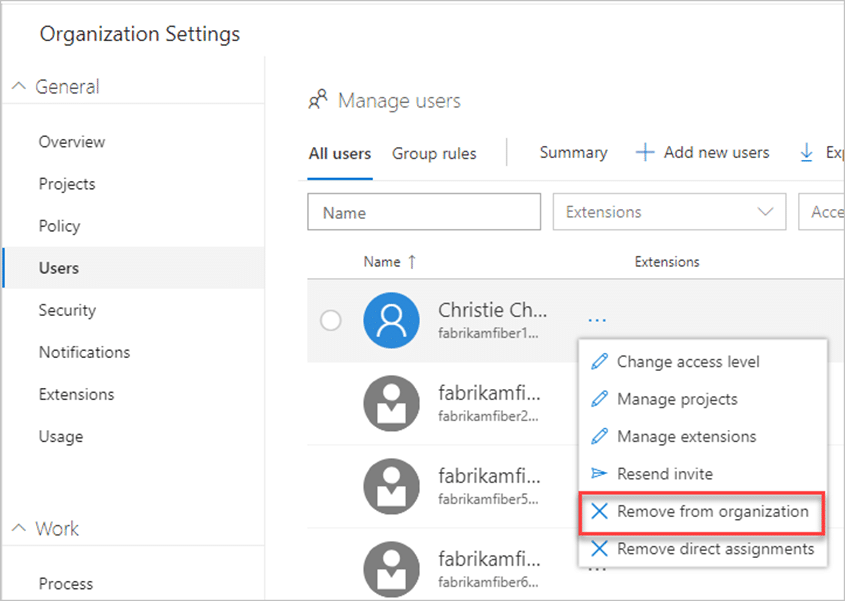 The last thing you want to do is continue adding to your organization’s network of teams and channels without deleting old ones. Over months and years of use, this will create an overload of information that no one can manage. By regularly cleaning up obsolete teams and channels, you’ll help employees work faster within the ones they use currently.

One potentially disastrous side effect of failing to define the end of the Teams lifecycle is that employees may take matters into their own hands and delete teams or channels without realizing the potential consequences. If IT doesn’t catch the mistake within 30 days, the information will be lost forever.

To get ahead of Teams sprawl and organization woes, you should create a plan for Teams lifecycle management that clearly outlines when to perform certain governance tasks. For example:

Your Teams lifecycle management plan should dictate the creation process for teams and channels, including:

Define a clear Team creation process with rules and templates: 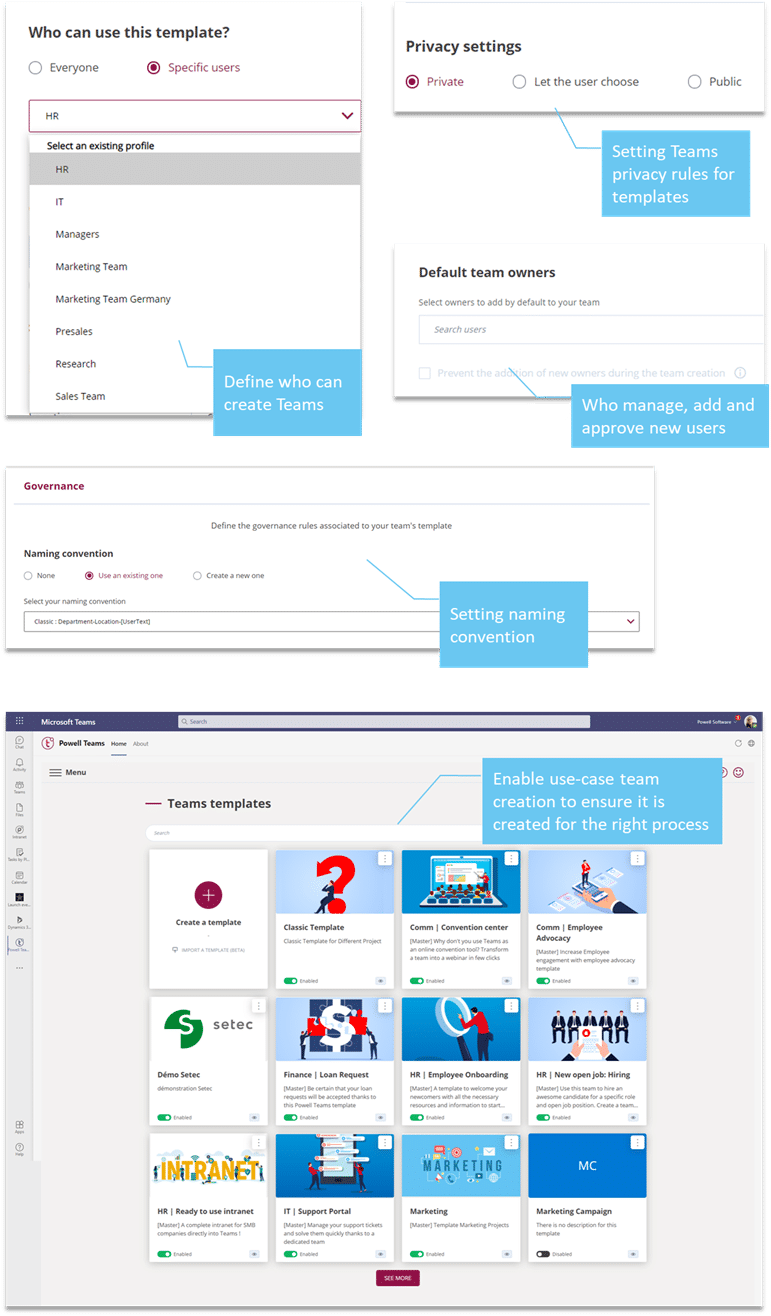 2. Set up checkpoints for ongoing management

As the Team evolves, it should undergo routine maintenance to help keep things running smoothly. For example:

Once a Team is no longer needed, it can either be archived or deleted. Archiving a Team simply moves it out of sight while it’s inactive, retaining all the messages and information within it. Deleting a Team is permanent, although it can be reversed for up to 30 days. With this in mind, you should decide: 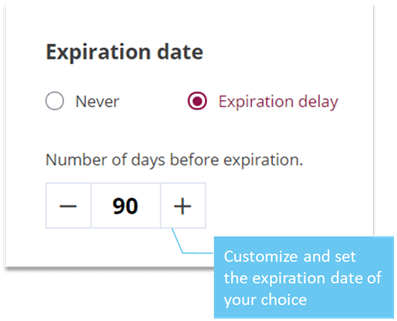 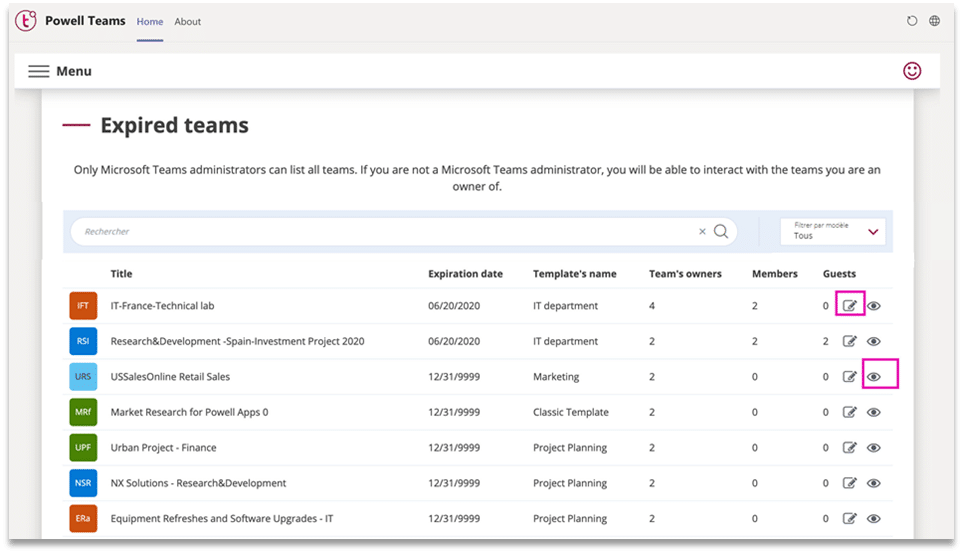 Managing the Teams lifecycle doesn’t need to be a manual process. Powell Teams is a platform that enhances your organization’s Teams experience with predefined processes for lifecycle management, including built-in naming templates and governance tools. Schedule a demo to find out how easy it is to automate your company’s Teams lifecycle.